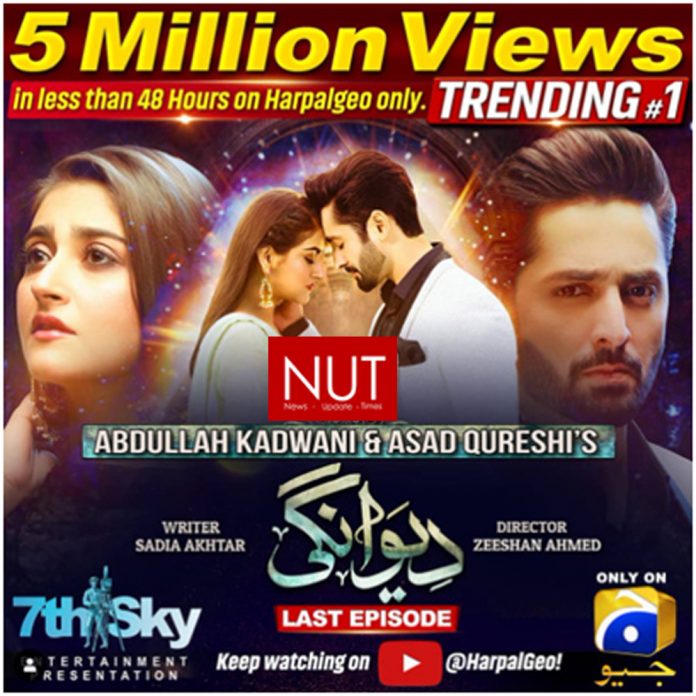 Lahore (Muhammad Yasir) After its phenomenal success during its run, 7th Sky Entertainment’s most hyped drama of the year -Deewangi was also one of the most searched words on Google in the country. Google released its annual ‘Year in Search’ list on Wednesday – and it didn’t come as a surprise that Abdullah Kadwani and Asad Qureshi’s drama ‘Deewangi’ was one of the most searched words in Pakistan.

Deewangi did not only garner huge TRPs for Geo, it also continued topping the rating charts and trending on top spots on YouTube throughout its run. With its last episode, the show brought further records for 7th Sky Entertainment, with an excellent rating 15.6 (25.4 peak rating). The finale of the drama managed to get 5 million views in just under 48 hours and continued trending for hours on YouTube and Twitter.

7th Sky Entertainment’s ‘Deewangi’ followed the story of Nageen – a girl who went through a journey of love, betrayals, and hardships – taking on everything that came her way. The drama succeeded in breaking several stereotypes surrounding a ‘bechari’ female lead – and also managed to garner a lot of appraise from critics and audiences.

Abdullah Kadwani and Asad Qureshi have continued to put Pakistani entertainment on the global map with their brilliant dramas, and the success of Deewangi, though not surprising, proves their credibility and strength in the entertainment industry.