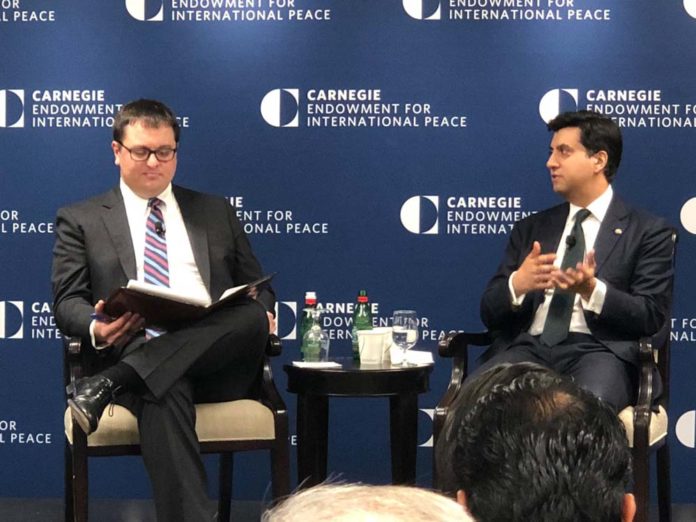 In his opening remarks, Ambassador Siddiqui highlighted the Government of Pakistan’s efforts to attract foreign direct investments through incentives, reform, and trade agreements.

“Pakistan has jumped 28 ranks in the latest Ease of Doing Business rankings by the World Bank and given that the report measures comparative performance of countries, Pakistan has made considerable improvement through reform”, the Ambassador stated.

Ambassador Siddiqui went on to narrate success stories of foreign investment in Pakistan including the telecom sector which has foreign ownership and management.He further identified sectors such tourism, agriculture and manufacturing which offer vast potential for successful investment.

Opening remarks were followed by a fireside chat-styled conversation to discuss Pakistan-U.S. business ties, the outlook for improving Pakistan’s anti-money laundering and countering financing of terrorism (AML-CFT) enforcement, Pakistan’s experience of doing business with China under CPEC, and the role that Pakistani and American businesses and entrepreneurs should play in U.S.- Pakistan relations.

During the discussion, Ambassador Siddiqui underscored the exponential improvement made by the current administration in order to comply with FATF’s requirements. “To date, Pakistan has largely addressed 14 of 27 action items, with varying levels of progress made on the rest of the action plan. However, just one year ago Pakistan had made close to no progress on compliance and even by October 2019 Pakistan had only addressed of 5 of the 27 action items on the FATF action.”

He also emphasized that significant efforts are being made to ensure timely prosecution and adjudication of CFT and money laundering cases which are an important element of the FATF action plan.

On being inquired about the experience of working with Chinese companies under CPEC, Ambassador Siddiqui explained that the experience was largely positive. He stated that the training and technology transfer resulting from CPEC will have positive outcomes for Pakistan over the long run. Ambassador Siddiqui commented further on the openness of CPEC projects for international collaborations, emphasizing on the need for U.S and other international players to proactively search for opportunities to collaborate on CPEC projects.

The event was hosted by James Schwemlein, a nonresident scholar in the South Asia Program at the Carnegie Endowment for International Peace. Schwemlien is a former U.S. diplomat experienced in South Asia and U.S. foreign economic policy.

The South Asia program of the endowment, hosts policy debates relevant to the security, economic and political developments in the region. The program’s diverse team of experts offer in-depth analysis on South Asia’s most pressing challenges to various stakeholders.

The event was attended by politicians, academics, media, and policy makers.